The University of Deusto was inaugurated in 1886. The concerns and cultural interest of the Basque Country in having their own university, as well as the interest of the Jesuits in establishing higher studies in some part of the Spanish State coincided in its conception. Bilbao, a seaport and commercial city which was undergoing considerable industrial growth during that era, was chosen as the ideal location.

University of Deusto aims to serve society through its contributions with a Christian approach to today’s realities. It shares the mission of serving people and society through its contributions to science and culture while participating in the mission of the Society of Jesus. Its challenge and fundamentals are therefore the fulfilment of its mission of service to the faith by serving science and culture, seeking the benefit of society and thus strengthening its very reason for being.

As a university, its guidelines are love of wisdom, desire for knowledge and rigour in scientific research and methodologies. Therefore, its main focus is on achieving excellence in research and education. Another objective is to provide the background for free persons, who are responsible citizens and competent professionals, equipped with the knowledge, values and skills needed to take on the commitment to foster learning and transform society. 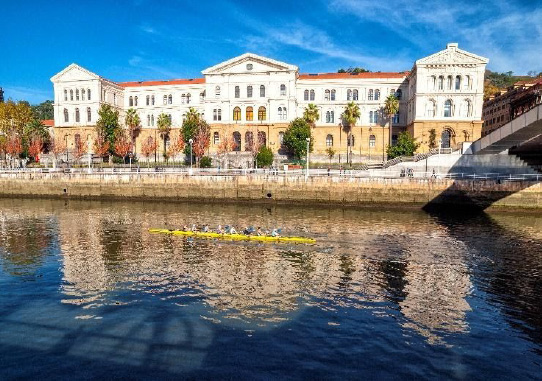 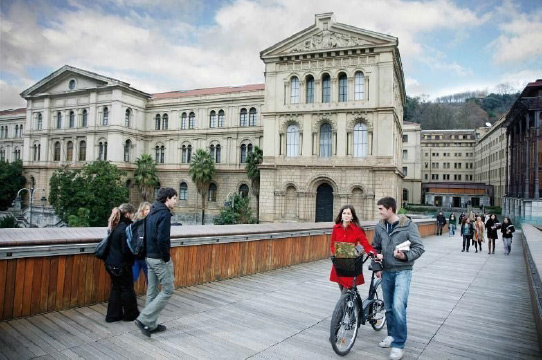 Bilbao is the centre of a metropolitan area with more than one million inhabitants, a city traditionally open to Europe. Within the universal scope of knowledge and general interest in mankind that make Deusto distinctive, our university feels especially close to Basque society. Our aim is to serve it as an education institution, responding to its cultural, social, technical and economic needs at all levels.

Beyond individual projects and research which is co-ordinated from chairs such as Law and the Human Genome, Leisure and Disabilities, there is a clear option for the social topics of interdependency, distribution of resources, migration, human rights, development, poverty and environment, ethics and society at the university. Studies on cultural identity (individual and collective), and European integration processes are being carried out by various international research groups.

The University of Deusto is striving for internationalisation, without excluding other regions, and demonstrates a clear commitment to Europe and Latin America, having signed agreements with more than 200 universities. Approximately 1,300 students and 50 professors take part in mobility programmes. The entire University adopted the European credit system in 1994, and works to promote it and improve its quality. Deusto was the first European university to extend the European credits to all its faculties.

Service-learning
at the University

The characteristics of the Service-learning methodology as a tool that integrates experience, reflection, learning and action, make it a very adequate instrument to materialize the Ignatian pedagogy, which seeks the complete development of the person. Since the vocation of service is clearly present in Ignatian pedagogy, service-learning methodology is key to Jesuit universities.

In a service-learning project, the four dimensions of the Ledesma-Kolvenbach paradigm that underpins the Jesuit universities' educational model are naturally interrelated. The concrete experience of a perceived and felt need, promotes reflection and human. University of Deusto is an active member of UNIJES (Universidades Jesuitas de España), IAJU (International Association of Jesuits Universities), KIRCHER Network (Jesuit Higher Education Institutions in Europe and the Near East Network), and IFCU (International Federation of Catholic Universities).

"It's a matter of coherence between the command of the Church and the mission of the University (...) It isn't about being good people, it's about giving an opportunity for better quality of teaching and education. This is strategic. Associate it with the improvement processes"

"It is necessary to start from the recognition that the University doesn't own knowledge, and needs to place the leadership in students and the community with their knowledge and experiences"

"Service Learning is not a creation of Catholic Universities but we recognize in this methodology many opportunities to educate students. We see how much students learn about themselves, about the course and about society by being confronted with aspects of social justice. SL is a gift from the outside that we Catholic Universities can use to help us deepen our commitment to social engagement, linked to the Church’s social mission".

UNISERVITATE is a global and networked programme that is established through a process of permanent development and the integration of new actors and institutions from a series of regional hubs strategically distributed around the world.